Pineville is well-known for a number of important and historic cemeteries. For many years, Alexandria had no cemeteries within its city limits, and all burials took place in Pineville.

The historic Rapides Cemetery is located on the banks of the Red River in downtown Pineville, and is the oldest cemetery in Rapides Parish. In 1711, Franciscan missionaries established a Catholic mission at the "Grand Rapides" on what is now the site of the Rapides Cemetery.

The oldest marked grave existing today is that of Pierre Baillio who died in 1809. Many of the earliest graves have fallen victim to time, and the nearby Red River. The river levee was actually built on top of some graves.

The photo below was taken in November of 2011 by the author. 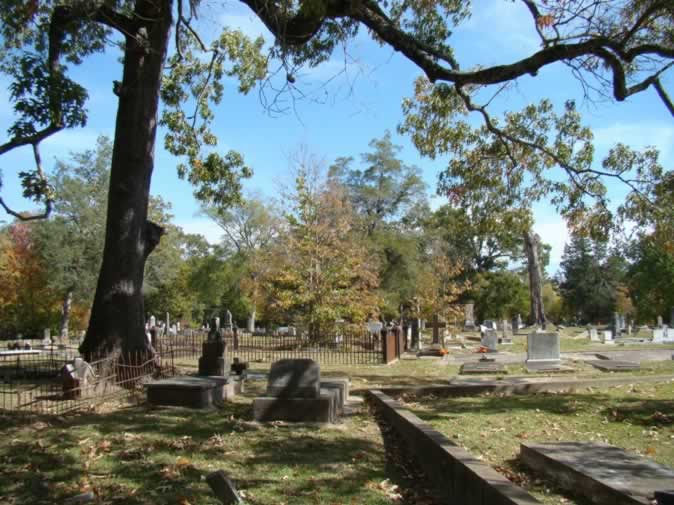 Mt. Olivet Chapel is the oldest structure in Pineville, built in 1857, and sits amidst a historic cemetery on Main Street. Mt. Olivet is a wood frame chapel that is considered one of the finest examples of Gothic Revival architecture to survive the Civil War era. Noted architect Richard Upjohn was its designer, and its construction was supervised by Charles Schraeder, a native of Germany.

In 1859, on the eve of the Civil War, the newly completed chapel was dedicated by the Rt. Rev'd Leonidas Polk, the first Episcopal Bishop of Louisiana. "Bishop" Polk later became "General" Polk of the Confederate army. He died in a skirmish towards the end of that conflict. Many Confederate dead were laid to rest in the cemetery that grew up around Mount Olivet, which functioned as a mission of St. James Episcopal Church into the twentieth century.

The Jewish Cemetery is located on Main Street in downtown Pineville, bounded on the right (east) by the Mt. Olivet Cemetery.

The earliest Jewish settler in the Alexandria-Pineville area was Henry Michael Hyams, whose name appeared in the 1830 census. The earliest grave marker identifiable on the site tells that Angela Bernstein, daughter of Samuel Bernstein, was buried here after her death on Sept. 19, 1852. At least six other early burials were of victims of the 1853 yellow fever epidemic.

Greenwood Memorial Park is a perpetual care cemetery, and one of the oldest and largest in the state. It was established in 1922, and features slightly rolling hills, trees, and a small lake.

The Alexandria National Cemetery, located in Pineville on East Shamrock Street just off Main Street, was established in 1867 to offer a permanent place of rest for the many Union soldiers who died in Central Louisiana from wounds and disease during the Civil War.

It later took in the remains of veterans from other conflicts, including many from the Indian Wars in Texas.

The site is rectangular in shape, and the main entrance is located on the west side of the property. The cemetery is enclosed by a brick wall, constructed in 1878.